We asked Iain Macintosh to manage Newcastle United on Football Manager 2022 and we’re really surprised you’re still clicking on it every Monday and Friday. He’s a middle-aged man pretending to be a football manager, what’s wrong with you? Ah, well, at least it’s almost over.

Now that the end is near, I feel a new sense of purpose. It is now. We only live for this run-in; a series of poignant “harsh”. My last game against Liverpool. My last trip to Old Trafford. My last boring but crucial U23 friendly to keep fringe players cool. Everything is coming to an end.

Not that we told the players. Leon Bailey and Andrea Belotti approached me to discuss new contracts. “Let’s talk about it at the end of the season,” I told them. They agreed to wait. Suction cups.

After chasing Barcelona out of Europe, we are tired. We could rest, but it’s the FA Cup semi-final and it’s Liverpool, so it makes no sense to rest people. We haven’t beaten them in five games and it would be really nice to put him here and book a place in the final. 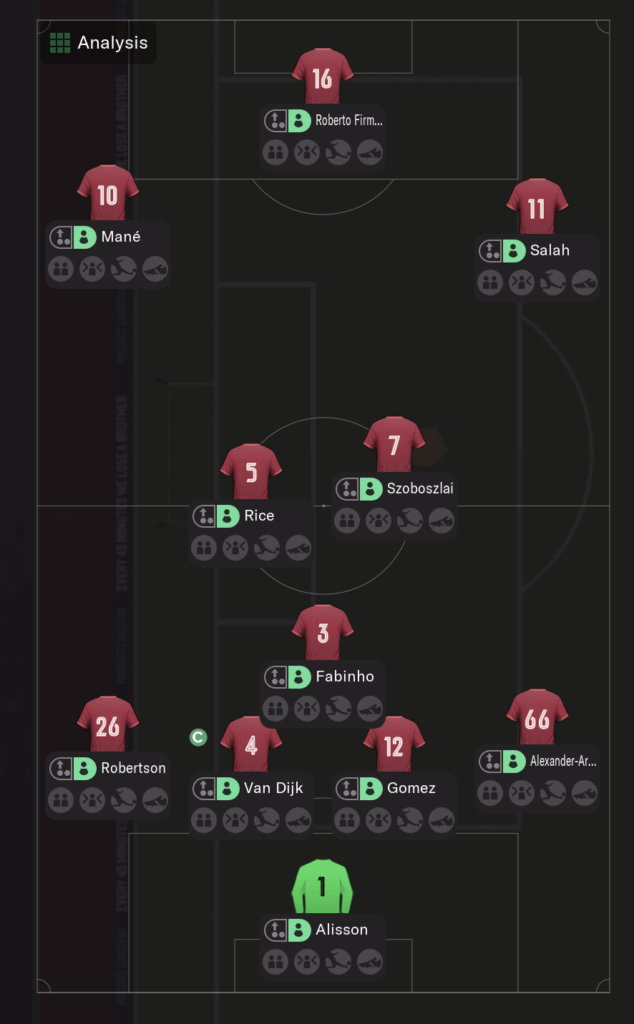 After 25 minutes of dominance, Liverpool were bored with perpetual one-touch passes and Roberto Firmino looped one into the top corner. But it actually seems to stimulate us in life. Joao Cancelo floats a cross into the box from the left, Benjamin Sesko takes a throw-in and Allison rams him through like a hammer into the side of a greenhouse. Nicolo Barella converts the penalty. 1-1.

He really seems to be setting up for a classic encounter when Andrew Robertson meep-meeps past Bailey, to which Bailey responds by chasing him to the sideline and trying to knock his kneecaps into the upper tier. The referee has no choice but to send him off and that seems to be it.

But just before half-time, Houssem Aouar landed a free kick at the near post and Merih Demiral got up to give us a 2-1 lead. Then Sesko is denied by a brilliant save from Allison. Our improvised 4-4-1 could well be enough to keep us in the game.

Alas, Liverpool’s advantage begins to be felt in the second half. We are already tired, we cannot follow their races. Mohamed Salah equalized from close range, Konrad de la Fuente replaced him and then scored the winner moments after arriving on the pitch. We played bravely, but it takes more than courage to beat Liverpool at 10. Our war on three fronts is down to two. 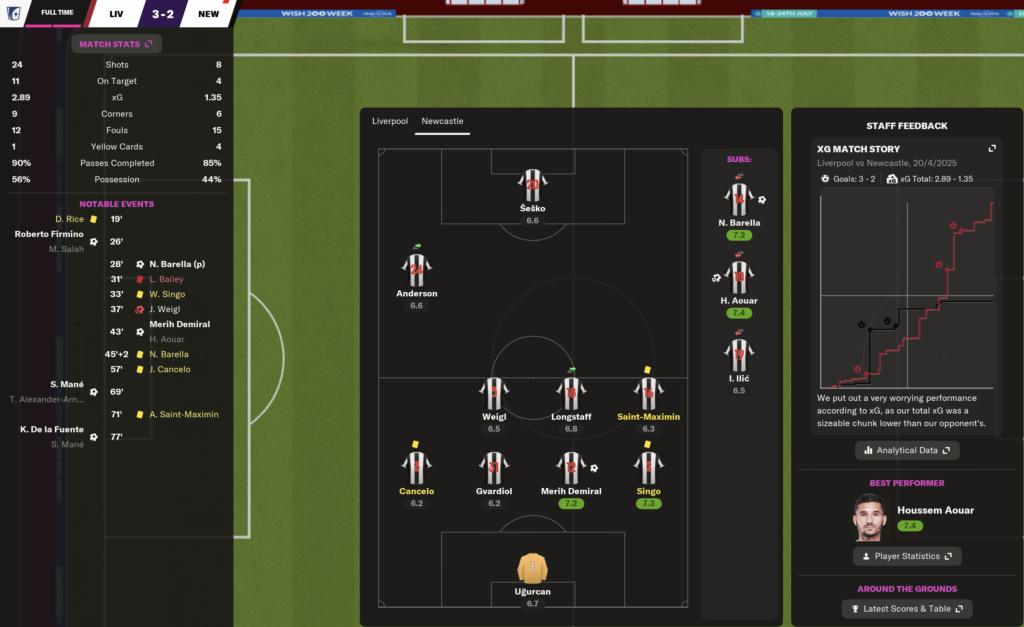 There is no doubt; Stoke City is our bogey side and Tyrese Campbell is the master booger. He scored five goals in his last four games against me. All things considered, I’m unhappy that we have to play them without Sesko, Bailey, Demiral, Barella, Josko Gvardiol or Ainsley Maitland-Niles, who are all suspended, injured or groaning with fatigue. It’s not ideal, but we have Manchester UFC in three days and Bayern Munich in the semi-finals three days later, so we really have to get used to it.

What about Tyrese Campbell? 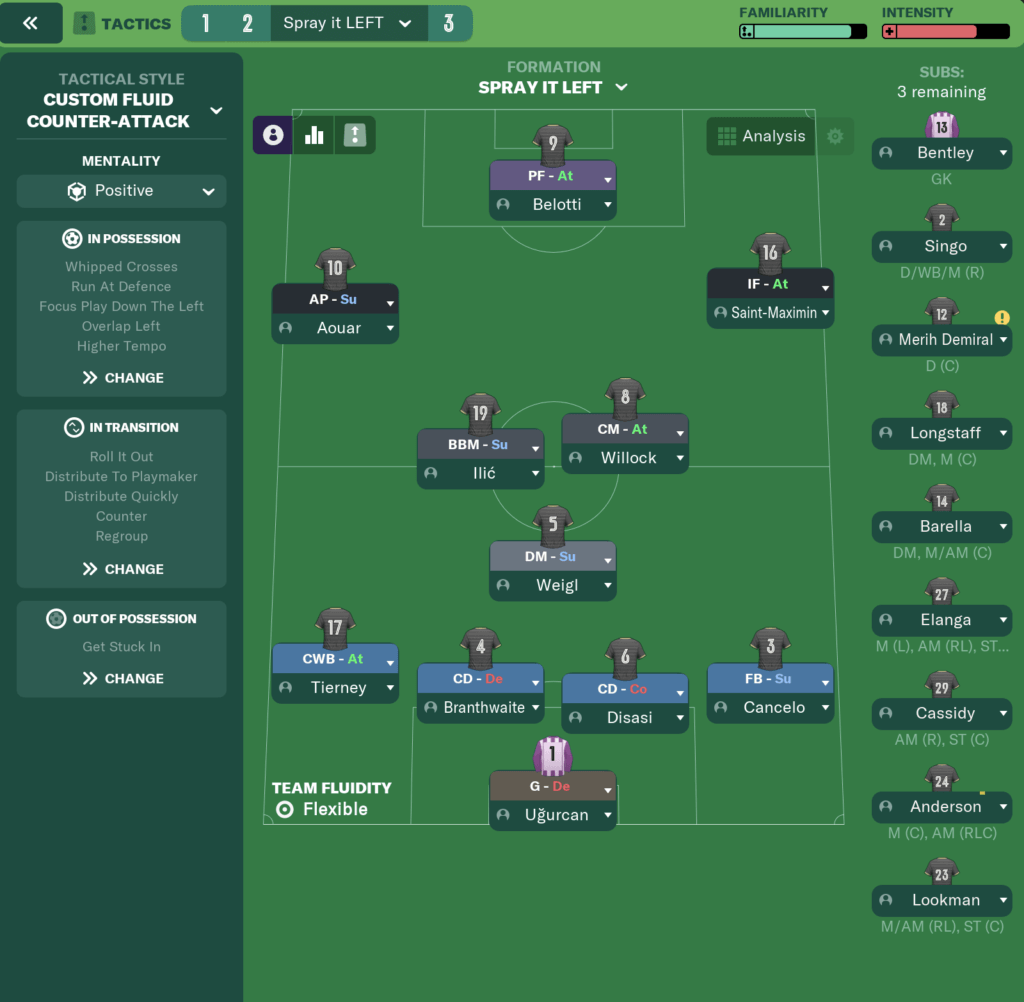 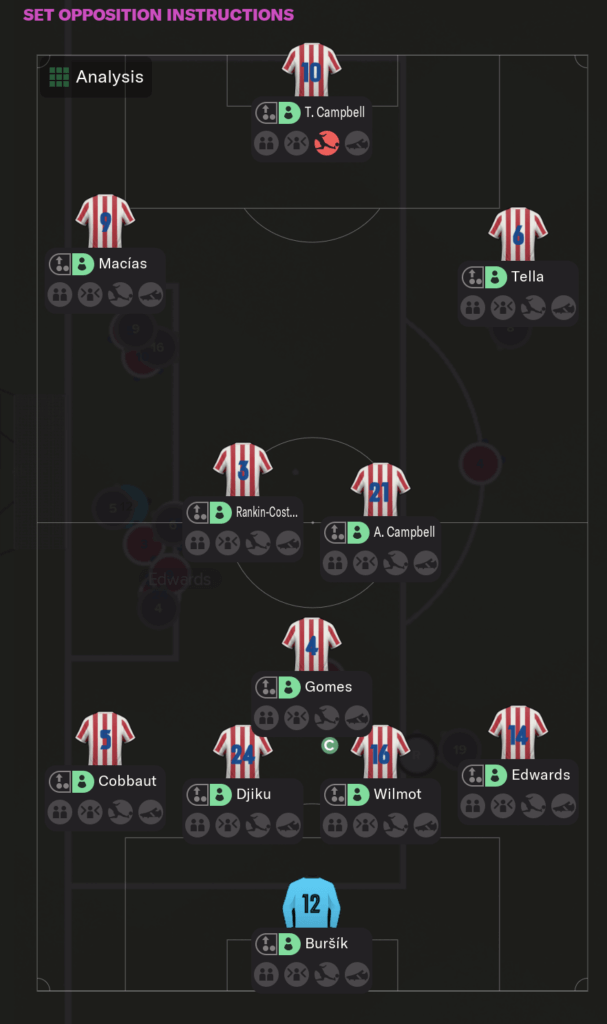 We are in charge from the first minute. Campbell doesn’t like him and he disappears from the game after some scary challenges from Axel Disasi. We don’t get the goal our performance deserves until the 65th minute when Aouar hits a free kick into the top corner.

We stopped the game and as injury time begins they try one last hoof forward. Campbell stands against Disasi and for the first time all day he wins the ball, knocking it to Mohamed Daramy. 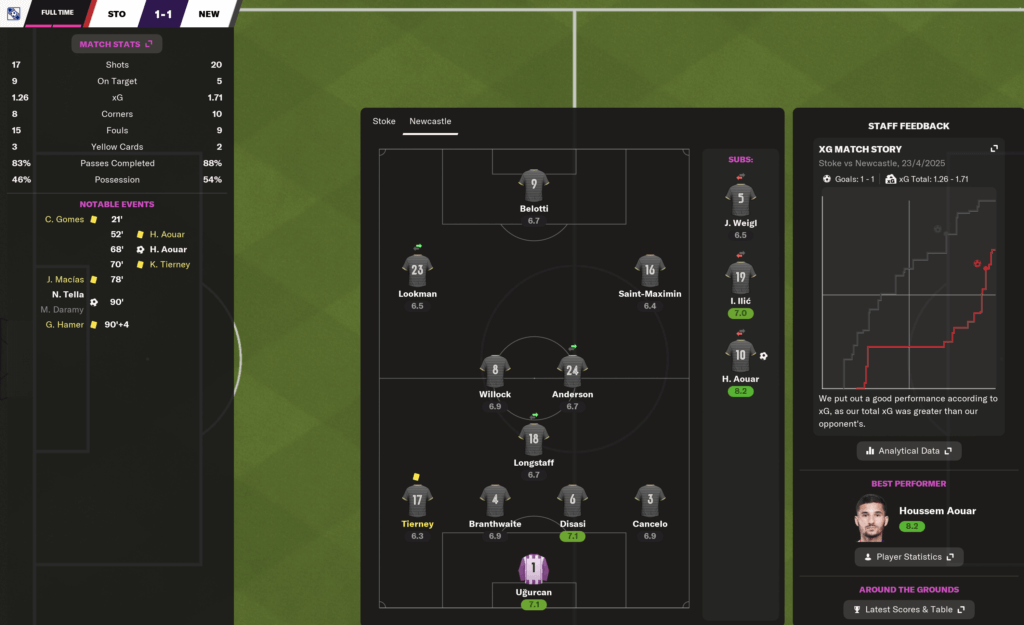 The only good thing is that we are now able to welcome back several first team players after their rest/sleep/sleep on the naughty stage. It’s Old Trafford against the runaway title leaders and any kind of result would be a good result. These points lost in Stoke allowed the chasing pack to gain ground. 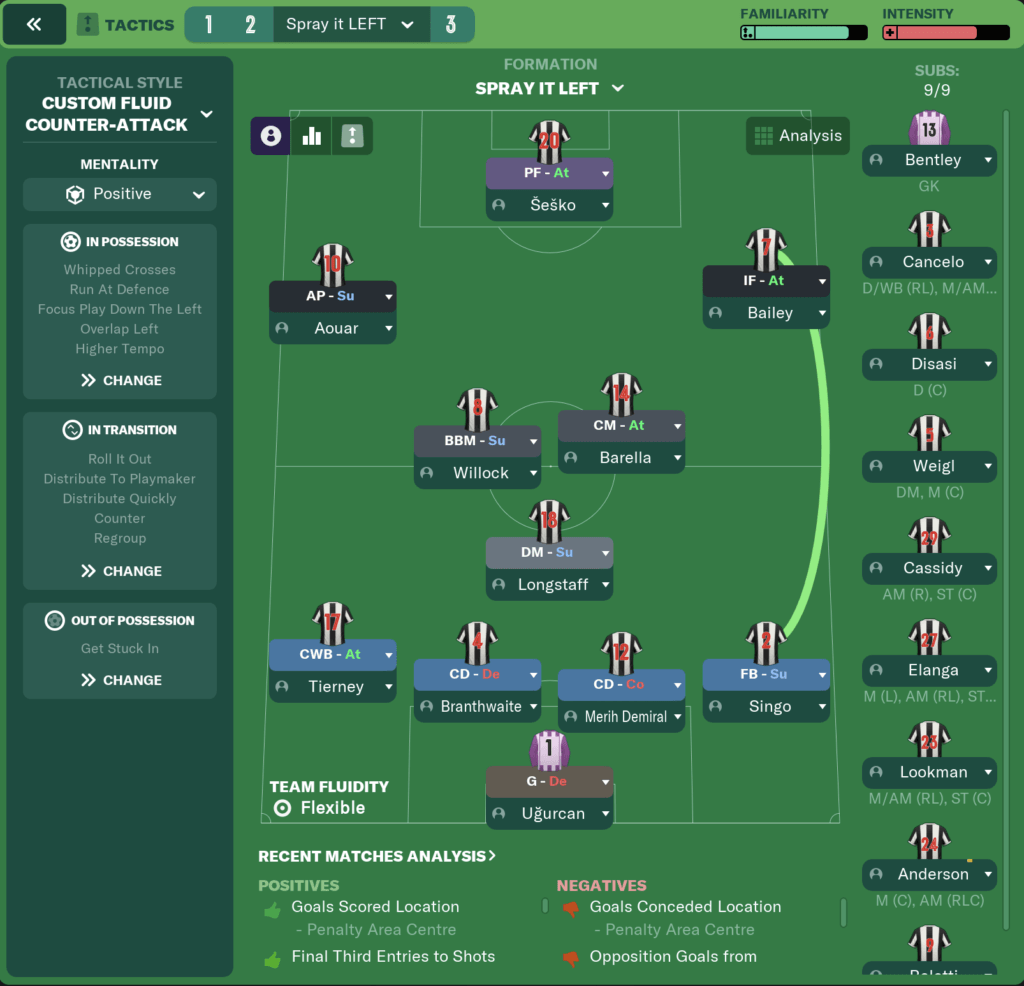 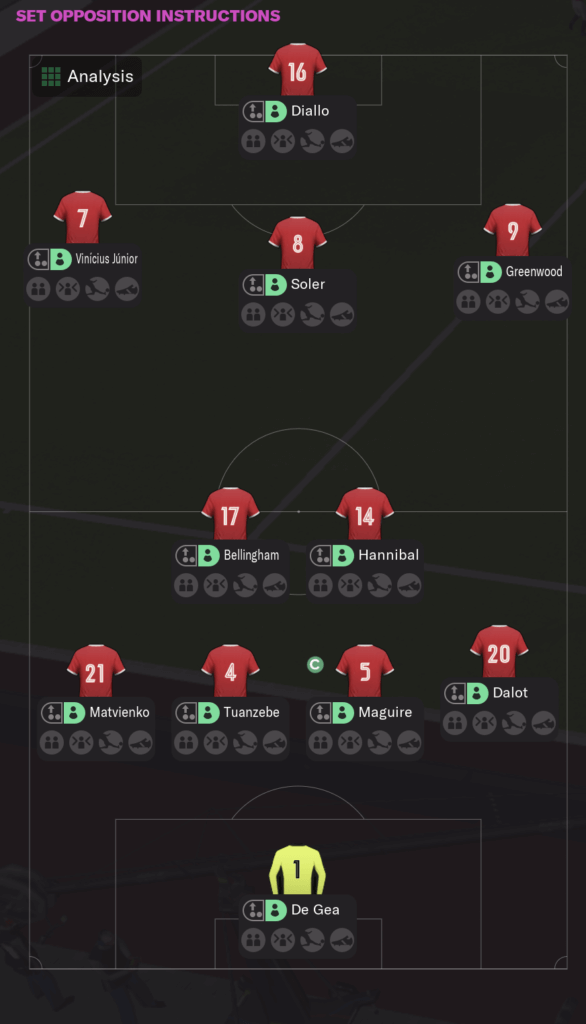 With an equally busy schedule, Ole Gunnar Solsjkaer takes the opportunity to play a weakened team. Well, he looks weakened. There’s Harry Maguire in it anyway. But they don’t seem weakened as the game progresses.

Everything falls apart in a matter of minutes. Amad Diallo spins at the near post, Joe Willock wastes a perfect one-on-one chance, then Vinicius Junior doubles the lead. Just before halftime, Bailey pulls one down for 1-2 and we’re still kind of in the game, if you ignore all the stats.

I let them know how I feel about their performance, but I don’t expect them to get over it. It’s UFC Manchester. We have never beaten Manchester UFC. But right after the reboot, they end up in a terrible mess. David de Gea passes out at Maguire, Sesko leaps up, steals the ball and smashes it into the back of the net. 2-2. Are we back in there?

No. Vinicius immediately restores the UFC lead and then Axel Tuanzebe heads for another. 2-4. With the match lost, I’m making a triple substitution to save our best players for Bayern Munich midweek.

And then Cancelo fires one at the near post when it looked like nothing was happening. 3-4. Shortly after, we win a corner and the big Jarrad Branthwaite gets up to equalize. 4-4. And then, with barely time left, Sean Longstaff throws a ball over the top, Sesko flips Maguire upside down, comes out and drives the ball home for a remarkable 5-4 turnover.

Old Trafford is furious, the supporters come out of the stadium. They’ve spent years watching the UFC do this to other teams, it’s not supposed to happen to them. But there are five minutes of stoppage time, and after three and a half minutes of them, the UFC wins a free kick just outside the box. Up Steps club legend Paul Pogba and I don’t even have to watch. 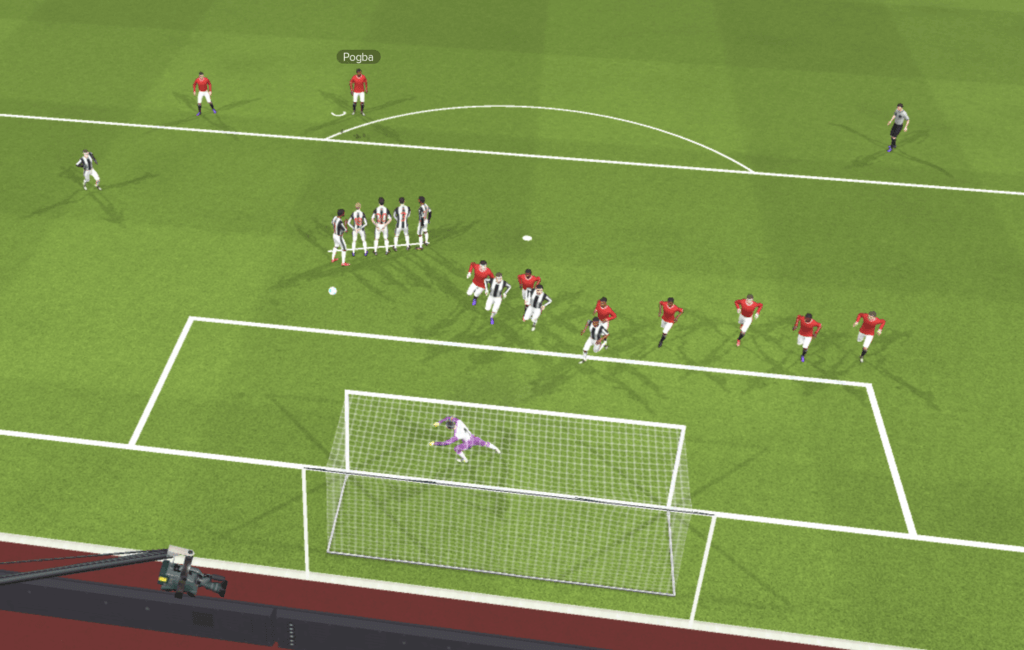 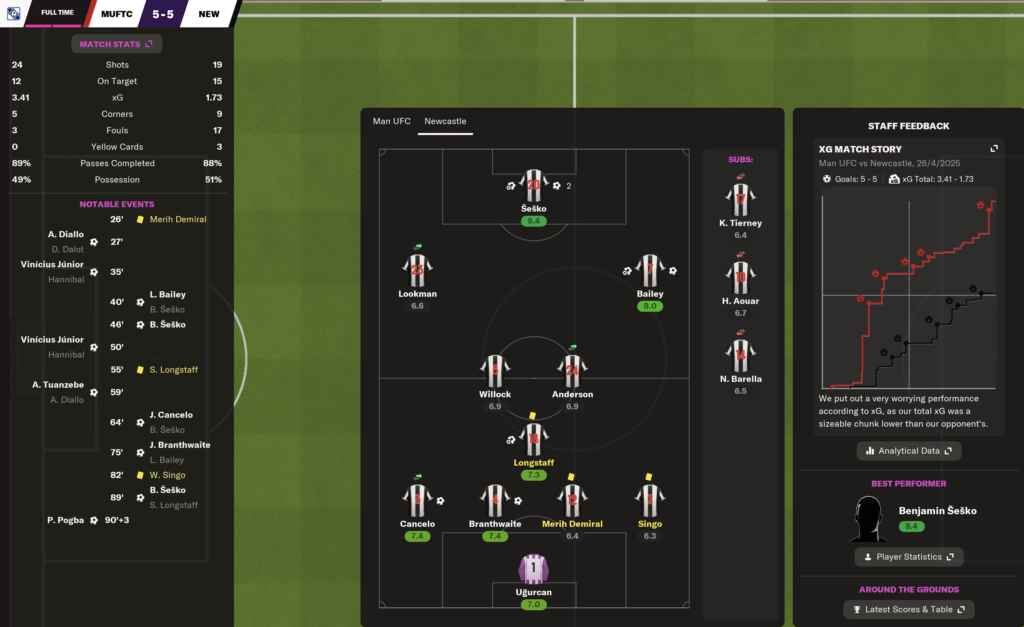 After all this excitement, I guess we should remember it’s three games without a win now. If you consider that we have two points from two games when we were probably expecting three, that’s not too bad, but pace is everything in football. Especially at this stage of the season. Imagine what we would look like if we had held on for the win there.

However, despite the fatigue, we are complete for Bayern Munich. All I ask is that we stay in the game until the second leg. I would love to be able to take them back to St James’ Park with all that’s left to play. 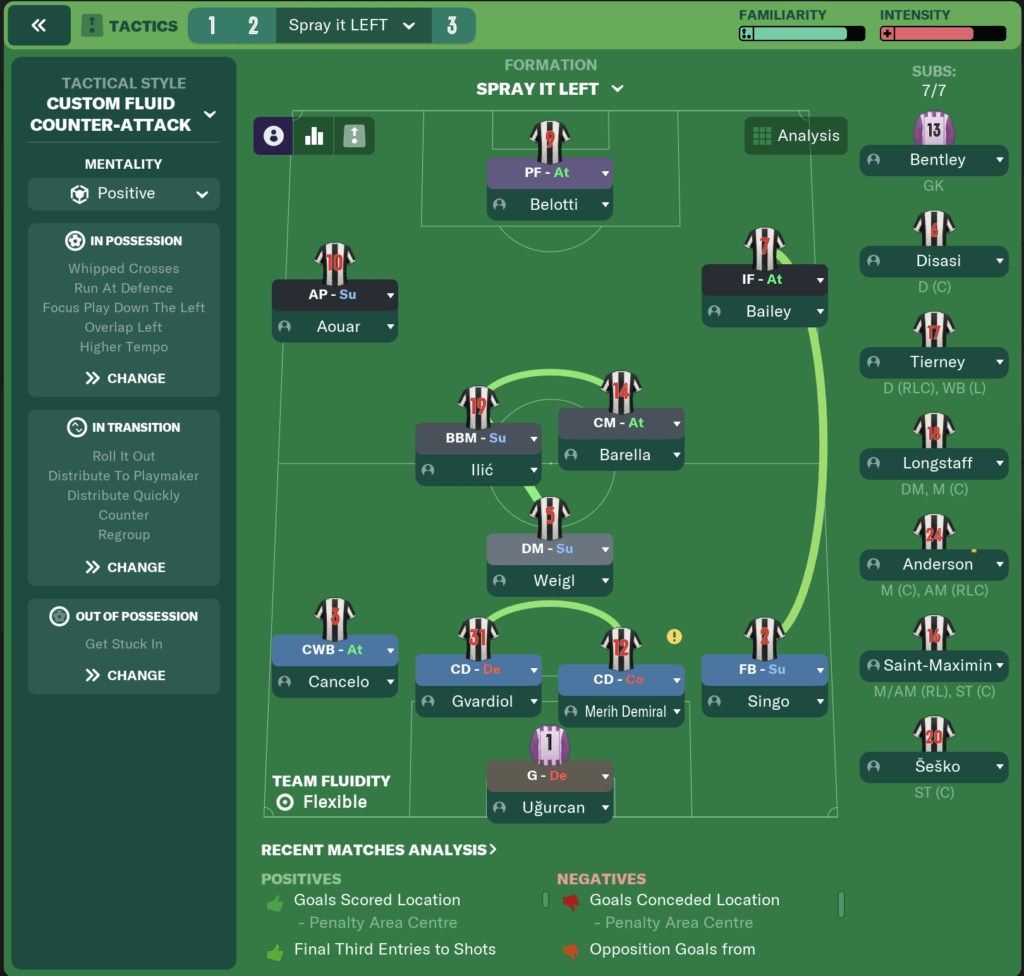 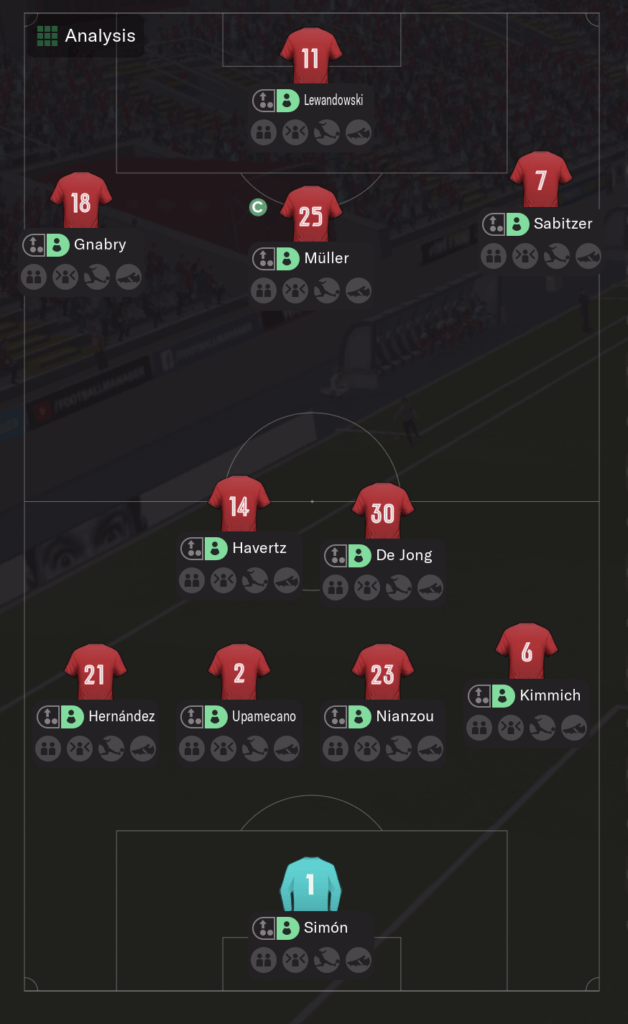 Bayern are probably one of the best teams in Europe, but they’ve been allowed to age and we don’t look discouraged at all. Bailey, free to play in Europe, should open the scoring early, but it is denied by an incredible saving tackle from Tanguy Nianzou.

We make more chances, Belotti chains against each other to get the ball out of the post. But we are tired. Really tired. I should have made more edits. Demiral, Wilfried Singo and Bailey all ask to be released at halftime. But I just need a little more of them.

Moments after rebooting, I’m vindicated. Bailey is able to get inside his man, secure the ball at the near post and Belotti is there to finish. We lead 1-0 in Munich.

Now it’s Bayern who look tired. I do the triple change to put new legs on the court and we just try to keep applying pressure to them. We look smart, we look composed. It’s been almost four years since I took over the broken and substandard shards of Steve Bruce’s Newcastle and who would have thought we would end up here. We are at one of the gaming giants and we beat it. The clock is ticking, Bayern have no answer and we have one foot in the Champions League final. 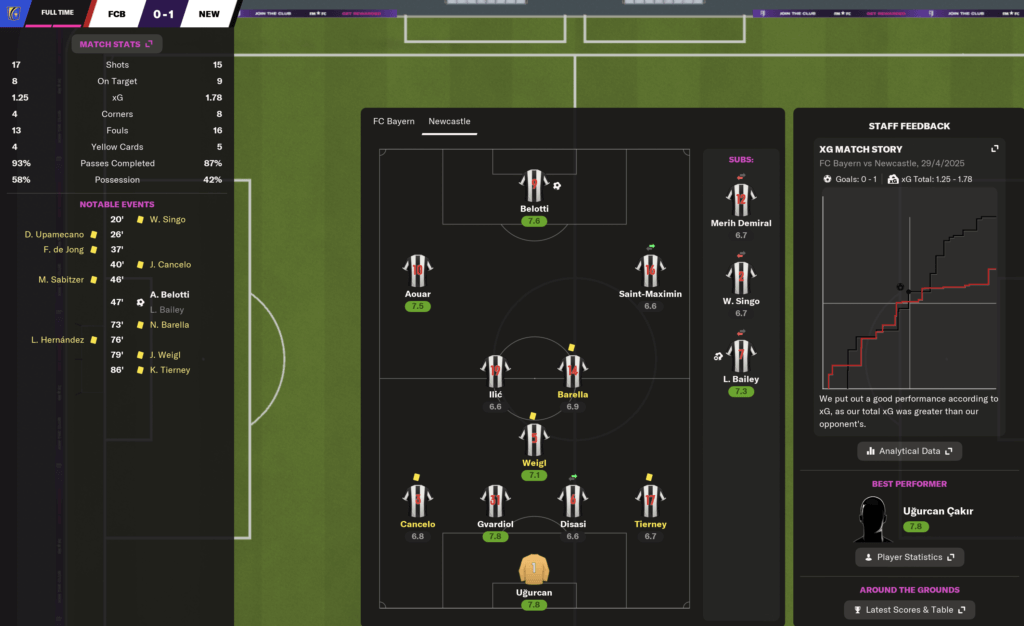 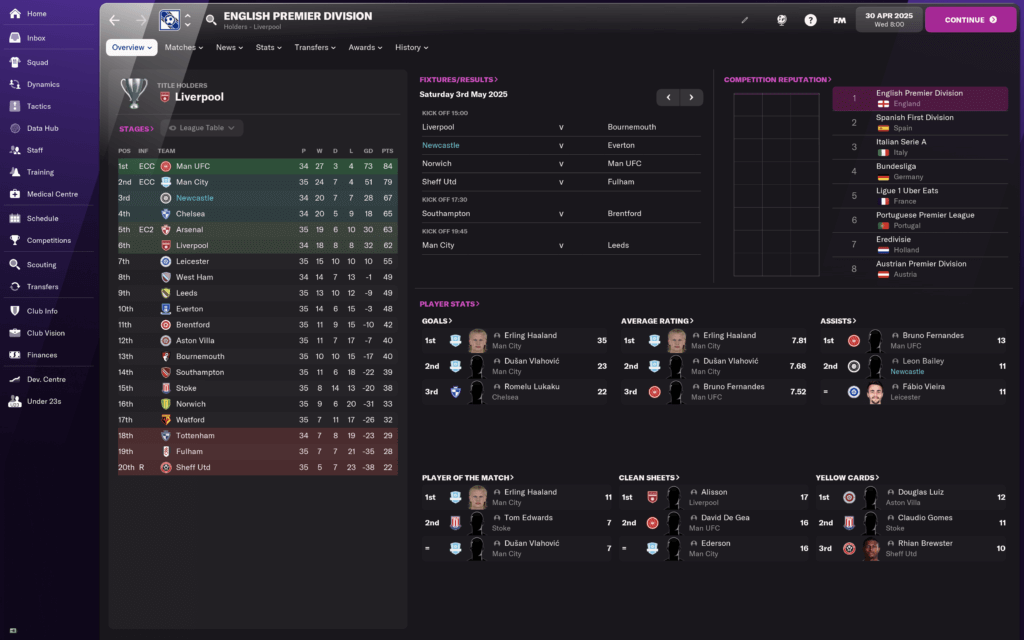 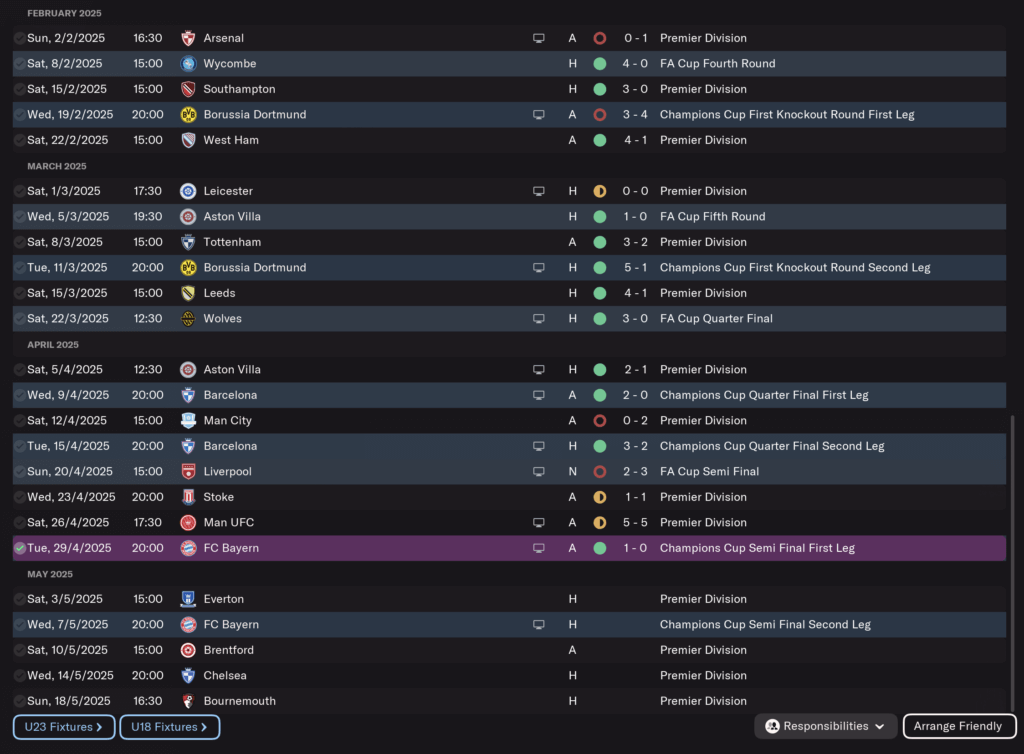 Want to know more about FM de Iain and his team? Why not check out his podcast — The Football Manager Show sponsored by Livescore — free on Apple, Spotify and all the usual podcast platforms, and of course without advertising on The Athletic.