Often there is an element of luck when it comes to trading. Even if your analysis is correct, the timing is very difficult. A famous real-world example can be found in Michael Burry, the legendary American investor who correctly predicted the 2008 housing bubble from Michael Lewis’ best-selling book “The Big Short.” He faced a revolt among his investors that nearly drove him out of the very trades that would put him in the history books. Burry’s backers balked at a steady stream of costly payments made to keep his deals in play as markets faltered.

There is a way for traders to compensate for luck – risk management. Forgetting this essential part of the strategy is how an incredibly lucky trader – someone who can often follow trades correctly – can still lose money overall. Conversely, the effective use of risk management is how a low success rate can still translate into profitability.

How come a lucky trader can lose money overall? Consider a person who profited from 8 out of 10 trades, earning $10 per trade. Of the remaining two trades, however, $50 was lost each time. On the net, this will leave the trader 20 dollars poorer. In this special report we will show how an unlucky trader can still be profitable and what you can do to optimize risk management.

A random walk simulation was used to imitate someone trading 100 times in a row. Each random walk has a few parameters: the starting account balance, the maximum risk a person is willing to take per trade as a percentage of the account balance (which remains the same whether the trader wins or loses money), the risk-reward ratio (how much the trader wants to win compared to the amount put at risk), and finally the trader’s luck (the chance that a given trade in the sequence will be profitable).

The first random walk is shown in the table below. It simulates a trader who starts with an account of $2,000, risk 1% per trade, has a risk-reward (RR) ratio of 1:1 (meaning the first trade risks losing $20 to make a profit of $20), and has a 50% chance. Being lucky about half the time had a predictable outcome. The ending balance ($1,990) was almost identical to its starting point ($2,000) after about 100 transactions.

It should be noted that this is a calculated study with a code and no margin of error or human emotion is taken into account. This means that no matter what happens, it assumes that the modeled trader always sticks to the game plan perfectly. It also assumes that trades can be closed seamlessly – with a profit or a loss – at designated parameters with absolute precision. In the real world, stops may not always be executed at the specified price, leading to some slippage. These simulations also assume that 100 trades were taken, which will not correspond to the level of activity of each. With that in mind, this is more of a demonstration of the importance of risk management than a one-size-fits-all trading system.

What happens when we take the same sequence but make our hypothetical trader unlucky, leaving everything else unchanged? With a 25% chance, disaster strikes. Someone with a risk/reward ratio of just 1:1 would see their account balance almost halved after 100 trades ($1137). As we will see at the end of this journey, however, an increased risk/reward ratio can compensate for worse luck.

To find ideal risk/reward ratios for given chance levels, these random walks were run multiple times to find statistically significant interpretations. In this study, a cycle constituted 100 trades performed 100 times. That’s a total of 10,000 trades per cycle! On each cycle, the risk/reward ratio automatically increased by 0.05, starting at 1. The program is coded to continue doing this until 100% of trades are completed at or above the balance departure from the account.

So what does it look like for someone who is lucky about half the time? Well, in the image below, we can see that the optimal risk-reward ratio is on average 1.6 (meaning that with a starting balance of $2,000, the strategy aims to achieve 32 $ profit while risking $20 on the first trade). The latter two will adjust as the account balance changes to maintain an RR ratio of 1.6, ensuring that risk remains at 1% per trade.

The code ended up increasing the risk/reward ratio 6 times. Including the starting point, the cycle ran 7 times. In other words, 70,000 trades were made to find the optimal RR ratio. To further optimize this study, another 10 sets of random sequences were used. This means that approximately 770,000 trades were placed to find the optimal risk/reward ratio for a 50% chance! It’s not exactly 770,000 because sometimes the RR ratio was above/below 1.6.

When someone is lucky half the time and using a risk-reward ratio of 1.6, we can expect an average ending balance of $2734 (36.7% return, which remains constant regardless of the size of the starting account balance) after 100 trades. In the lower half of the image, there is a normal distribution of results. There were a few outliers, with one account exceeding $4.5,000. A few others were above $3.5,000.

What about other luck levels? In this study, I used the following values: 50%, 40%, 33%, 25%, 20% and 10%. The optimal RR ratios are displayed in the table below for a given chance level. As expected, lower levels of luck required higher risk/reward ratios to compensate. When you are lucky 40% of the time, an ideal RR ratio for a sequence of 100 trades seems to be 2.45.

At 2.45, a total of 30 cycles were simulated for a given random sequence. As before, 10 more were performed to help optimize this study. By combining all these sequences, around 3,300,000 trades were placed to find the optimal risk/reward ratio for 40% chance.

Someone lucky only 10% of the time can still make a profit. However, this would require the daunting task of maintaining a risk/reward ratio of 21.47. 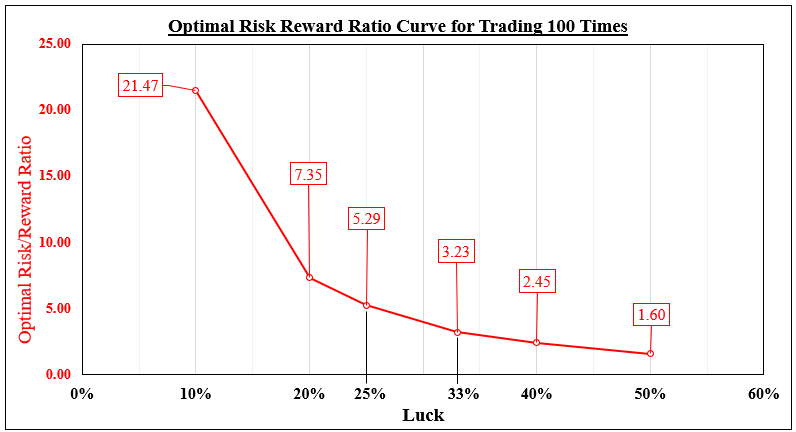 Is business success based on luck?

Now let’s revisit the previous scenario of a trader who is only lucky 25% of the time. Using a risk-reward ratio of 1:1, they lost almost half of their account. Using the optimal risk/reward ratio of 5.3 suggested in our analysis, their ending balance becomes $2,844, a return of 42.2%. Do traders have to be lucky to be profitable? Absolutely not. Success depends on risk management.

* All random walks simulated with Python

element. That’s probably not what you wanted to do! Upload your application’s JavaScript bundle to the item instead.